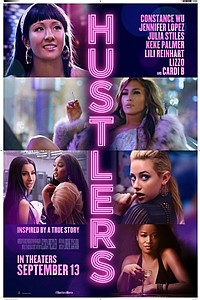 The stock market crash of 2008 put a dent in many American salaries, but none were hit harder than the pole dancing navvy who relied on the kindness of strange businessmen to pay the rent. Meet learned clothes peeler Ramona (Jennifer Lopez), the She-Wolf of Wall St., with a plan to stick it to the man that involves cocktails à la knockout drops and horny suckers with bottomless expense accounts. Per custom for Hollywood films of this variety, the dancers frequently parade around in more threads than the slobs who pay to see them. Two fundamentals writer-director Lorene Scafaria neglects to “borrow” from the Scorsese playbook: gunplay and depth of characterization. As good as Lopez and her onscreen accomplice Constance Wu are, they can’t act what isn’t in the script; other than a dedicated work ethic, we’re never given access to their thoughts. Omitophiles in the crowd will no doubt go gaga over Lili Reinhart’s running gag as a spewing stripper. 2019.

Marks, you're much too kind!

If I were to see it, it would be only for Cardi B.

Having not seen the movie, how do you know how kind I am? As for Cardi B., her best work was in Nine Trey Gangster Bloods

And I thought it was at the Gentlemen's Club!!!

Hey, what happened with the LAST "female empowerment" film??? Oh, yeah, "The Kitchen" flopped because there was no skin!!!