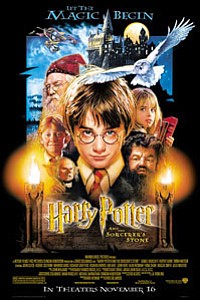 The children's book by J.K. Rowling, now a movie by Chris Columbus — maker of, among others, Adventures in Babysitting, Home Alone, Mrs. Doubtfire, Nine Months, Stepmom, and Bicentennial Man, chief rival of Steven Spielberg for his in-touchness with the Inner Child. No longer applicable, quite plainly, will be the line of defense to the effect that, however good or bad it might be, the kids at least are reading it, reading something. Even if you haven't read it yourself, you can infer a slavish fidelity to the text on the grounds that no special-effects movie, no "event" movie, no movie scored by John Williams, would otherwise keep so leisurely and strung-out a schedule of dramatic incident. It's more a matter of going new places and meeting new people (or new owls, goblins, trolls), a social schedule. The bespectacled little hero, if you didn't know, is a put-upon orphan who, on reaching his eleventh birthday, and despite the interference of an abusive adoptive family of Dickensian grossness, discovers that he is a natural-born wizard and is eligible for admittance into Hogwarts School of Witchcraft and Wizardry, there to develop his infinite inner potential. In short, he is a close cousin to every neglected, unappreciated, unloved, scorned, mocked, but ultimately (sweetly, revengefully) triumphant hero out of Hans Christian Andersen's fairy tales. In the end, his plodding path will lead him to a confrontation with the evil entity who slew his parents. But this destination is not signposted with the efficiency or urgency of a Hamlet (for instance). Maybe admirers of the book will be content with what amounts to an ancillary text of lavish illustrations. Still, it's not the, or a, book. More bluntly, it's not anything special. With Daniel Radcliffe, Emma Watson, Rupert Grint, Robbie Coltrane, Ian Hart, Alan Rickman, Richard Harris, and Maggie Smith. 2001.