Give Me Liberty 3.0 stars 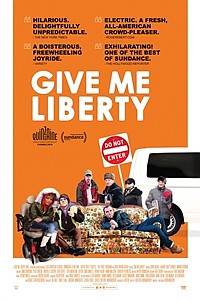 A funny thing happened on the way to the cemetery. Vic (Chris Galust) is as compassionate a caregiver as you’re likely to find — off hours finds him looking after his mentally eroding grandfather. But this medical transport driver’s heart of gold is frequently dented by his demanding clientele, in this case, a group of stood-up seniors in need of a lift to boot hill. Whether he’s hearing from irate passengers or a frustrated dispatcher roaring on the two-way radio, Vic’s answer remains the same: “I’ll be there in 10 minutes.” Donald Sutherland was considered for the role of grandpa, but director Kirill Mikhanovsky wisely populated the van with real people, disabilities and all. Things frequently go off course, but Mikhanovsky’s flair for editing his way out of any corner the script paints him into only adds to the film’s unstoppable pace. Those who demand at least a modicum of originality in exchange for their entertainment dollar won’t be shortchanged by this divinely chaotic comedy. 2019.