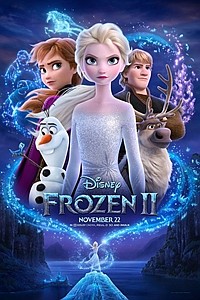 Let’s start with the biggest and happiest surprise about Disney’s followup to what was, before the Lion King remake, the biggest animated film ever: Olaf the Snowman is considerably funnier and more useful to the story this time ‘round. His ridiculous recounting of the first film’s events to some folks who need catching up is a meta delight, in contrast to the studio’s usual self-commentary — and this installment’s own jab at its use of a super-creepy, sleep-killing lullaby as story setup. Other positives: Elsa’s ice powers make for some spectacular visuals, and the animators have outdone themselves when it comes to depicting water. (Speaking of which: the invocation of Travis Bickle’s "real rain" — the sort that will wash not only the scum off the streets but the streets themselves off the face of the earth, along with the stain of original sin that made those streets possible — in an all-ages film is gutsy, if nothing else.) But it’s not much gain against a good deal of loss. The tension between Elsa and her sister Anna this time around is…unconvincing, as it has less to do with “Don’t shut me out,” and more to do with, “Where I am going, you cannot follow.” The story, which concerns a disturbance in the elemental spirits and a mystery in a misty wood, is both dragged out overall and rushed through in crucial moments to the point of neglect. And the songs range from underwhelming (“Into the Unknown”) to cringingly silly (“Lost in the Woods”). Directed by Jennifer Lee and Chris Buck. 2019.