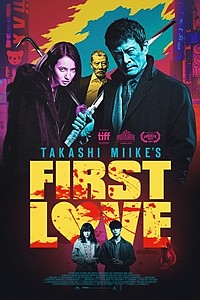 Heroine Monica is a drug-addicted whore who was pimped out by her sexually abusive father in order to pay his debts, and when we meet her, she’s in her underwear, spread-eagled face down on the floor in a mid-range shot that also captures the basement-style squalor of her living arrangements. But this is a Takashi Miike picture, so the fact that she’s clothed and not being tortured lets you know that you’re in for what, from him, qualifies as a gentle, goodhearted — though not exactly sentimental — romp. (She is, however, tormented by visions of her lumpen father, clad only in tighty-whiteys and a rumpled sheet — easily this year’s best onscreen ghost.) And before her meet her, we meet hero Leo, a Japanese boxer who fights mostly because it’s what he knows how to do, but finds himself staring down death after he takes a surprising fall in the ring. Maybe time to find some motivation, courtesy of a curbside fortune teller! But before that, Leo’s avocation provides Miike with an opportunity to both set the tone and advance the plot early on, as he wins a fight via a knockout punch to the head, only to have the camera cut to another head, this one cut free of its bodily moorings, rolling, still blinking, into the streets of Tokyo. It seems the Chinese have decided to move in on the Yakuza, and have loosed an assassin — the sort who keeps her swords in a golf bag, their handles concealed by cheerful knit club covers. What follows is an exercise in madcap violence and betrayal surrounding a stolen shipment of drugs, much of it fueled by either criminal incompetence, the primal will to survive and protect one’s own, or the clash between the two. But what keeps it from becoming a bloody farce is Miike’s profound sympathy for his leads, innocents trying to find their way out of the maelstrom. 2019.