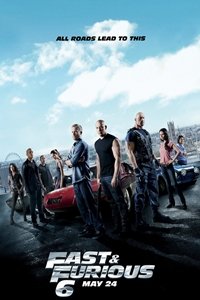 The cars, they are very pretty. Vin Diesel's voice, it is very gravelly. The Rock, he is very large. (Though not as large as the muscle hauled in by the bad guys. Say this for the Fast & Furious franchise: it understands that it must keep topping itself in terms of sheer spectacle, in terms of raised stakes, in terms of sculpted flesh and impossible stunts. Next time, maybe they'll race cars in space while they battle alien invaders.) The dialogue, it is very bad. The jokes, they are very broad. The plot, it is very tired. The conflict between the concepts of "team as machine" and "team as family," it is very silly. A team is not a machine. Nor is it a family. It is a team. With Paul Walker, Michelle Rodriguez. 2013.