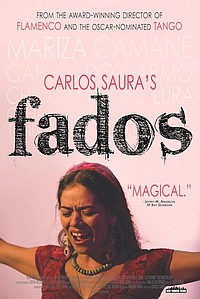 What Carlos Saura did for the art of flamenco and tango in films called Flamenco and Tango, he now sets out to do for that soulful Portuguese folk song, dating back to the early 19th Century, the fado. A spacious and spare studio, translucent partitions, process screens, backdrops, mirrors, colored lights, silhouettes — the full arsenal of stage tricks. The greater emphasis on song than on dance perhaps converts it, in a sense, into the most traditional movie musical of Saura’s multiple contributions to the genre. Yet it remains unclassifiable. As a quasi-documentary, it documents nothing other than itself. It is not a concert film. It does not take you through rehearsals. It offers nary a glimpse behind the scenes. It interviews no one. It supplies no narration and only the briefest printed text at the start and the tersest chapter headings throughout. (Saura is characteristically uninformative as to the names and identities of the performers.) It is arguably a kind of musical variety show in the vein of The Hollywood Revue of 1929 and Paramount on Parade, without a wisp of backstage plot, each separate number specially designed for the screen and organized around a unifying theme, to define fado, stretch the definition, chart the development, trace the influence, scope out parallels, pay tribute, and, in the grand and glorious finale, relocate it in the urban bar where it flourished, put it trustily into the mouth of the next generation (namely Carminho, adorably still wearing braces on her teeth). “Variety” also would be very much the word for the endlessly inventive presentation, the mixing-and-matching of the above-mentioned tricks, always with Saura’s selective eye, steady hand, solid footing. Whether he chooses at any instant to focus on faces, fingers, feet, or full bodies, his choices inspire absolute faith. Forget whether this is pure, or puristic, fado; it is pure cinema, luminous, molded, cohesive, flowing, rhythmic, mesmeric. With Mariza, Lura, Lila Downs, Argentina Santos, Chico Buarque, Caetano Veloso, Toni Garrido. 2007.