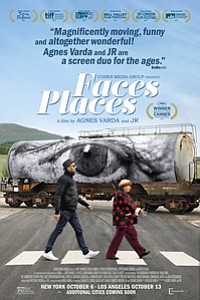 Jean-Luc Godard was 33 when he starred in Agnes Varda’s short comedy The Fiancés of the MacDonald Bridge. That’s the same age as the photographer JR, the sole person ever to share a director’s credit with the New Wave pioneer, and also her co-star here. By Varda’s own admission, an appreciation of their work depends on how one sees things. (She suffers from a degenerative eye disease, while he refuses to remove his shades.) To help muddy matters, JR is a dead ringer for JLG. Together, the pair makes an oddly compelling Harold and Maude coupling, touring the countryside in a minibus-cum-box camera and honoring the locals by turning the facades of buildings into ephemeral open-air portrait galleries. For a climax, Varda calls on alleged old pal and proven architect of cinema Godard. Will he come to the door, or forever sabotage her film’s narrative structure? You’ll have to see this captivating movie to find out. 2017.