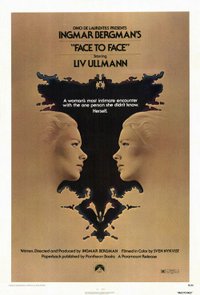 Ingmar Bergman's clinical account of a psychiatrist's nervous breakdown (the filmmaker's interest in psychiatry extends only as far as his affirmation of its inadequacy to spiritual crisis) is divided cleanly in halves. The first, the mundane half, contains some good stuff about the heroine's grandparents, particularly the fastidious set decoration of their Victorian apartment. The end of the first part, the initial crack in the heroine's composure, is a genuinely alarming scene. But after her subsequent suicide attempt — she gulps fistfuls of sleeping pills, tells the movie audience precisely how she feels ("not scared or lonely or sad..."), and lies down humming Brahm's "Lullaby" — the movie turns to fantasy and psychodrama, and it turns pretty dull. It is rife with the familiar landmarks of Bergman's world — the ticking clocks, the false countenance peeled away like a Max Factor facial mask to reveal a hideous B-movie monster underneath, an homage to Mozart, dreams depicted in the all-red color scheme of Cries and Whispers, and most of all the strong-boned, baby-pink face of Liv Ullmann. This harassed face occupies most of the screen, most of the time; and while it meets its tasks with zeal and courage, it has nothing new to show. 1976.