Dora and the Lost City of Gold 0.0 stars 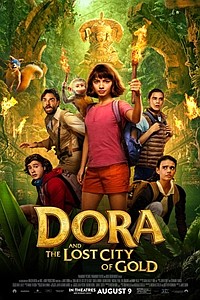 What an uncomfortably odd experience it is being the only one in the auditorium not in on the joke. Prior to last Saturday morning’s packed kiddie show, the closest I had come to Dora the Explorer was when her costumed likeness — making the rounds at the San Diego Latino Film Festival — accidentally backed over my foot. A favorable comparison to Dora’s first live-action theatrical foray seems in order; the pain incurred from that trampling was much shorter-lived. At least Isabela Moner is perfectly cast as the overbearingly buoyant pre-teen archaeologist voted “least desirable prodigy to take on a road trip.” An exercise in staring at a screen, Dora the Explorer left Scott the Scrutinizer little to work with. Not suitable for anyone over the age of seven, if by some chance the kids corral you into this Jumanji rip-off, at least see it all the way through the spirited, semi-reparative closing credits number. With Eva Longoria and Michael Peña as the most negligent parental units this side of Home Alone. 2019.

Day-um, Scott. Give Dora some love!