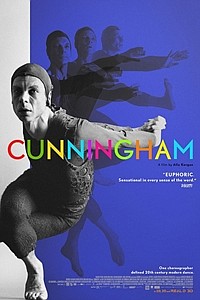 A woman who had traveled some distance to New York to attend one of dancer-choreographer Merce Cunningham’s performances later contacted a music critic to complain. It seems the show was so bad that the amount it cost — train ticket, babysitter, etc. — left her feeling gypped. The critic agreed with her buyer’s remorse, adding that the Cunningham’s troupe had no right to treat patrons in such a cruel fashion. I maintain as much of an appreciation for modern dance as I do for watching golf on TV. But this is a movie, and as such, anything can be, and in this case is, rendered cinematic. All it takes is an imagination allied with the eye looking through the viewfinder. Still, something about documentarian Alla Kovgan’s compositions nagged at me. Their beauty felt uncharacteristically distanced, and her ambitious frame-within-frame use of file footage unique, to say the least. Shot in 3D, it should come as no surprise that it will play in San Diego as a “flatty.” 2019.