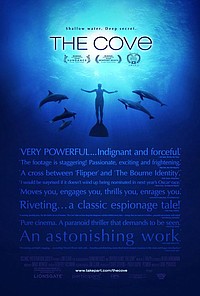 Call-to-action documentary by Louie Psihoyos, rather like a magnified detail from The End of the Line, a tight focus on a “little town with a really big secret,” the Japanese fishing port of Taiji, where an estimated twenty-three thousand dolphins and porpoises are covertly slaughtered every year. Upon his return from there, Psihoyos has pictures of the blood-red water to prove it. His chief guide and ally in this endeavor is Ric O’Barry, the one-time dolphin trainer on the Flipper TV series in the Sixties, who flipped (if you will) when the aquatic star of the show, real name Kathy, committed “suicide.” In large part the film is composed of standard talking-heads sermonettes, but it also records the hugger-mugger “mission” of an Ocean’s Eleven commando team in the field: high-def video cameras concealed in fake rocks, and so forth. The operation, for all its justifiable paranoia, doesn’t approach the pitch of excitement we would expect of a fictional thriller. But if it is not quite tense, at least it’s present-tense. 2009.