The Color of Money 2.0 stars 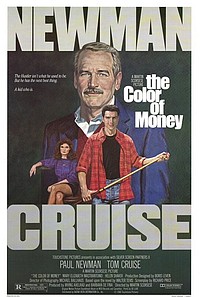 Martin Scorsese's extremely tardy sequel to The Hustler. The twenty-five-year interval between the two should prepare us for some pretty radical changes, and any perceived differences or inconsistencies in the character of Fast Eddie Felson (now a prosperous liquor salesman and only connected to the game of pool in the role of "stakehorse," or money man, in the very image of the George C. Scott character whom he so abominated in younger days) will be smoothed over by the incontrovertible fact that it is the same actor, though different in some ways too, who plays him. Harder to chalk up to the march of time, however, are the differences in cinematic tone and pitch and temperament and all that sort of thing — or in short the differences between the dour and austere Robert Rossen and the frenetic, florid Scorsese. These are enough, or pretty near, to disjoin the movie from its ancestor and invalidate it as a sequel. It is of course axiomatic that all sequels must be able to stand on their own, so there is something paradoxical about saying that the problem with this one is that it is too separate, too independent. But there it is. Precisely because there are so few movies set against the world of professional pool (and one reason for that is very much that the standard set by The Hustler was not just high, but dauntingly and discouragingly high), the independence of this sequel somehow brings it into more direct competition and comparison, gives it less freedom to deviate to some remote corner of the subject. A truer sequel -- a legitimate and logical and free-standing sequel -- would be under more obligation to stake out a new area, and could do so without any reflections being cast on its courage. Not so here. And as competitor rather than complement, The Color of Money pales: more of a green-around-the-gills green or a green-with-envy green than a fresh-crisp-lettuce green. With Paul Newman, Tom Cruise, and Mary Elizabeth Mastrantonio. 1986.