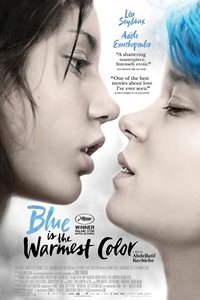 A sleepy-eyed 15-year-old schoolgirl (Adèle Exarchopoulos) begins a torrid love affair with an older, wild-eyed artist (Léa Seydoux) that could possibly end in infidelity. As if three hours weren’t enough to tell this paper-thin story, we won’t know what happens to the couple until part two arrives. This year’s Palm d’Or winner at Cannes leaves one wondering what Abdellatif Kechiche was doing with his other palm while directing this syrupy soft-core porn for teenagers who look old enough to break the NC-17 barrier. Not unlike Spielberg, every ten minutes or so, when the dialogue gets to be too much, Kechiche throws in a climax. Were the references to Sartre and Pabst in the comic book from which this was adapted, or is it a vain attempt on the part of the screenwriters to whitewash the audience into thinking there’s depth and passion to be found beneath all the close-up tribbing? The one star reflects the power of Exarchopoulos' almighty performance. 2013.

Betsey Sharkey in the LA Times called "Blue" a near-perfect love story. Now I don't know what to do. (Have you retired the cruel Black Spot of your predecessor?)