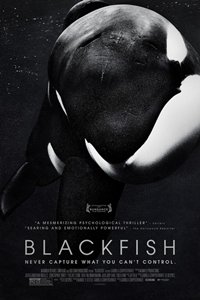 Is director Gabriela Cowperthwaite's documentary an indictment of SeaWorld's use of killer whales as modern-day circus lions, despite the physical and psychic toll that captivity takes on the creatures? Or is it an indictment of SeaWorld's apparent willingness to put its trainers in the water with animals it knows to be dangerous and even deadly? Or is it the story of Tilikum, a male orca raised in captivity, traumatized from his earliest days by his fellow prisoners, and valued chiefly for his breeding potential, who repeatedly lashes out in disastrous fashion? Or is it an investigation of our gradually improved understanding of killer whales, one that calls for a reassessment of how we treat them? All of the above. Now and then, the stories get in the way of one another, but SeaWorld doesn't look good in any of them. Excellent, chilling footage, and some remarkable testimony. 2013.

SeaWorld sucks. Always has, always will until it's closed down.