Beauty and the Beast 1.0 stars 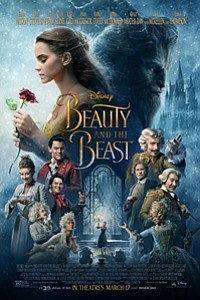 Comparisons — to Disney’s first live-action princess movie remake (2015’s Cinderella) and to the 1991 animated tale of a Beauty who wants “much more than this provincial life” (and the Beast who must win her heart if he is to recover his humanity) — may not be unavoidable, but they are useful. Cinderella strove and succeeded at expanding and deepening the core fairy tale without sacrificing the story’s “timeless classic” feel. In sharp contrast, Beauty imports a modern YA sensibility that extends beyond star Emma Watson’s empowered-young-woman demeanor — “provincial life” is so backward that Belle’s neighbors recoil at the sight of her teaching a child to read and destroy her labor-saving clothes-washing machine as if it were the devil’s handiwork, while the Beast is presented as the victim of a Bad Dad. And it extends further still, to the language — at one point, one character says of another, “We are so not in a good place right now” — and to the presentation, as a homoerotic subtext is here and there elevated to text. (Credit for all this may go to co-writer Stephen Chbosky, of The Perks of Being a Wallflower fame, as much as it does to director Bill Condon, who helmed the last two Twilight movies.) On that score, your mileage may vary; it’s when you get to the animated Beauty that things get rough: Ian McKellan makes a fine, melancholy Cogsworth the clock, but the rest of the enchanted servants come off hammy and campy, while Kevin Kline seems lost as Belle’s father and Luke Evans turns alpha male Gaston into a bigger cartoon than the original. To say nothing of the workaday new songs and the lumpen inelegance of the CGI Beast. But oh, those fantabulous sets! 2017.