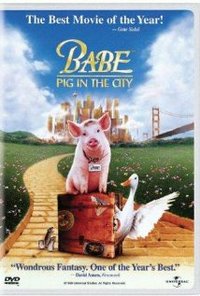 Before and after all else, this is simply a sequel, with some of the common symptoms of sequelitis: a swelling of the head, a puffing-up of the body, an overall putting-on of pounds. The critics' exaggeration of the original's modest charms can only have aggravated the situation. (The same director, George Miller, went the same route from Mad Max to The Road Warrior and beyond.) Besides a sequel, and still very much like its predecessor, and despite such a nod to Mom and Dad as an orangutan named Thelonious, it is a kiddie film, and proportionately beneath criticism. The pit bull speaks for the self-respecting film reviewer: "I have a professional obligation to be malicious." And Babe answers him on behalf of all Pollyannas: "Then you should change jobs." Or if not jobs, change targets. The pig has a different voice in the sequel, that of E.G. Daily, formerly Elizabeth Daily, once upon a time Pee-wee Herman's on-screen girlfriend. She quavers superlatively. Magda Szubanski, James Cromwell, Mickey Rooney. 1998.