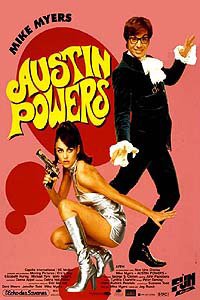 Contorted spoof of the early Bond films, or of previous spoofs of them, which of course were spoofs to begin with. Already the satirical aim can be seen to be shaky, and the persona of the superspy as a stereotyped Sixties "swinger" (it says so right on his license plate) bears no resemblance whatsoever to Sean Connery's or Roger Moore's Double-Oh-Seven. (Maybe the closest resemblance to James Coburn in the Flint films or Noel Harrison in TV's The Girl from U.N.C.L.E.) Mike Myers, who takes the roles of both the superspy and the arch villain ("We're not so different, you and I," perceives the cueball-bald, cat-stroking Blofeld type), and who also wrote the screenplay, works very hard to establish a mood of relaxed inanity, and he often stoops to the pee-pee-poo-poo level. There are a couple of well-staged, well-composed parodies of the coy nude scenes of an earlier era, but these, too, stoop low. With Elizabeth Hurley, Robert Wagner, Michael York, Mimi Rogers; directed by Jay Roach. 1997.