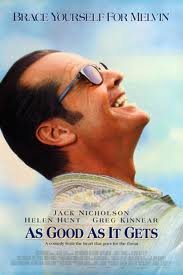 Boastfully misnamed, but well above average: an eccentric, bordering on bizarre, romantic triangle composed of an obsessive-compulsive homophobic misogynistic racist antisemitic (misanthropic, in short, besides dog-hating) best-selling romance novelist, and a next-door homosexual painter with a push-faced little pooch and a black art dealer, and a single-mom waitress with a sick little boy. The respective work of the writer and painter is only sketchily characterized, and the delightful dog disappears for too long a stretch in the flagging second half, and the little boy never comes into focus as an individual, a major oversight in light of developments. And while the movie must be credited for manufacturing more unusual and more problematical complications than the standard romantic comedy, it betrays itself in the neatness with which these are ultimately (albeit arduously) cleared up. Greg Kinnear, as the painter, comes off better than normal mainly because the circumstances are better. And Helen Hunt, no revelation to regular or occasional viewers of her Mad about You sitcom, is a slick, smooth, if shallow comedienne. The real revelation, strange to say, is Jack Nicholson, so commanding a presence for so long a time that we are apt to take him for granted. If his performance here is as surface-y as Hunt's, his range of expression, from full-body stance to the tiniest fluctuation of those famous eyebrows, is seemingly boundless; and the most amazing thing about him at this stage of his career is how hard he is still willing to work. With Cuba Gooding, Jr., and Shirley Knight; directed by James Brooks. 1997.

Okay: What is it about hateful men and adorable women who want to rescue them from their miserable selves that makes reviewers wet their pants? Makes you wonder ...

This was a very good film..........I don't think I would characterize Jakc's role as a hateful man though, strange and quirky yes, but not hateful.

Helen Hunt dropped out of sight after this film (or was it Twister??), what ever happened to her?

Yes, I liked the film as well, adored Greg Kinnear and his little dog, and Helen Hunt is utterly wonderful in it -- but I can't help but note how many films seem to have this same theme.

And yes, the character was hateful, selfish, evil, at the beginning of the movie. A real pig.