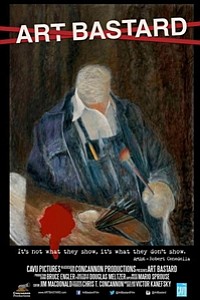 There’s a feature film waiting to be made on each of Robert Cenedella’s canvases; they illustrate as big a battleground of love, hate, and action as you’ll find in any of fellow outsider Sam Fuller’s movies. As an artist in all seriousness, Cenedella likes to cyanide-coat his message with humor. At the height of Elvis mania, he put himself through art school selling “I Like Ludwig” buttons. The ace provocateur returned Warhol’s Pop Art volley with a Yes Art backhand of his own and converted Robert Indiana’s iconic “L-O-V-E” cube into an equally recognizable block of “S-H-I-T.” It’s seldom that a documentary brings you this close to its subject, particularly one who’s basically an all-around decent human being. You may not recognize the name going in, but after spending 82 minutes watching director Victor Kanefsky cast a heartfelt lens in Cenedella’s direction, you’ll never forget him. 2016.