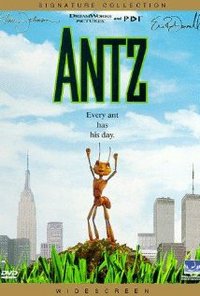 The second fully computer-animated feature, and a significant advance. The illusion of three-dimensionality, with finely sculpted and shaded bodies in cavernous and engulfing space, is quite remarkable. And the nuanced facial expressions, to say nothing of the perfect synchronization of mouth movement and spoken word, suggest an evolutionary leap that would leave the original King Kong in the same paleolithic class as Howdy Doody, Lamb Chop, and Miss Piggy. (Or for that matter, and maybe more to the point, the same class as Buzz Lightyear, Woody, and the rest of the Toy Story blockheads.) It is sometimes hard to remember that we are supposed to be on, or more often under, our own brown earth, rather than on some alien planet in a galaxy far, far away. The debatable decision to tip these crawling things into a vertical position, and to permit them to locomote as bipeds, tends to emphasize their kinship with extraterrestrials. On the other hand, the new surroundings and new insectile incarnation serve to refresh, even rejuvenate, the whining, neurotic, ninety-eight-pound-weakling persona of Woody Allen, who supplies the speaking voice of the Angst-ridden worker ant who longs for a more purposeful calling than that of relocation of dirt. Sentiments that could be unbecoming if expressed by a sexagenarian Jewish egghead can be vented more freely in a struggling young bug. With the voices of Sharon Stone, Gene Hackman, Christopher Walken, Sylvester Stallone, and Jennifer Lopez; directed by Eric Darnell and Tim Johnson. 1998.