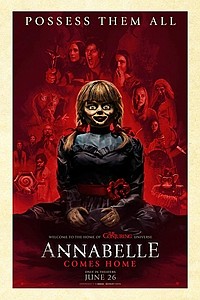 The sight of Annabelle belted in the back seat of the Warren’s car as she’s chauffeured home to the relative safety of the family’s prized collection of demon memorabilia opened the show with a grin. In no time, the smile turned upside down. Here’s a horror sequel that wants to be anything other than what it is: a picture about an evil doll. For what feels like an hour, an unseen boogey-person chases three girls around a house. Isn’t this essentially Halloween with a dirty doll standing in for Jason? At least Jason did more than simply sit in a glass case. And who ordered a werewolf?! Why not give Annabelle the power to fly or pilot a speedboat? Vera Farmiga and Patrick Wilson are smart enough to phone in their performances; as soon as a babysitter is hired to look after their daughter, the two actors pick up their checks and exit the picture until a plot hiccup demands they return for the climax. Screenwriter and first time director Gary Dauberman (It, The Nun) shows a capacity to direct as poorly as he writes. 2019.