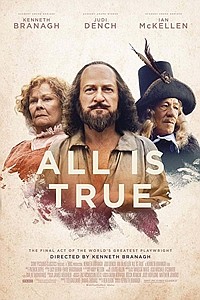 What if Tennessee Williams wrote a play about William Shakespeare? You know, something claustrophobic and overheated, with families made miserable by mores trapped indoors together, clawing away at each other with conversation until painful secrets from the long-buried past start bleeding out of the wounds. And then what if he got a guy who made his bones as an actor/director by re-presenting the Bard of Stratford-on-Avon to a generation (Henry V, Much Ado About Nothing, Hamlet, etc.) to both direct and play the man himself? Why, then you’d have Kenneth Branagh’s All is True, a film that opens with the tragic burning of the Old Globe theater — or rather, with some text announcing the burning of the Old Globe (and the end of Shakespeare’s career as a playwright), followed by an image of Branagh silhouetted against a screenwide sheet of flame. DRAMA, people. Happily, it’s not all hothouses and hollering: Will gets outside now and again to work on his garden, and when he does so, he gets to talk about his art in bucolic settings photographed with painterly care: creating his plays, putting them on, etc. And for some, just the chance to hear Ian McKellan’s Earl of Southampton reel off “When in disgrace with fortune and men’s eyes…” will make everything else bearable. Branagh’s goal here is noble: a portrait of the extraordinary artist struggling to live an ordinary life. But ultimately, it's a bit on-the-prosthetic-nose, and the disconnect between Shakespeare's genius for character and his befuddled attempts at personal relationships makes for a man too bifurcated to believe, as if the fire that gutted the Globe also burned his brain. 2019.