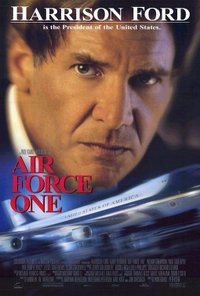 The President's plane is hijacked by reactionary Communists out of Kazakhstan, and only one man can stop them: the President himself. As a valorous Vietnam vet and a Medal of Honor winner ("He knows how to fight!" effuses his former commanding officer), he stands roughly the same chance of beating the odds as Steven Seagal's Casey Ryback or Bruce Willis's John McClane or anybody's James Bond. And just think what it would do for his approval rating! Fortunately the star is the warm-blooded and amiable Harrison Ford (presidential in both halves of his name), and such is the state of contemporary action films that we find ourselves feeling pathetically grateful for some perceptible signs of worry and of active, frantic, desperate thinking on the part of the hero. (Leaking milk carton suggests unplugging the fuel tank, etc.) These, to be sure, are small mercies. And for the most part, the movie is well content to make the standard bad deal of more and more "excitement" (oh no! Russian MIGs! oh no! sluggish wing flaps!) at a cost of less and less credibility. Which leads unavoidably to less and less excitement: that's why it's a bad deal. Gary Oldman, Glenn Close, Wendy Crewson, William Macy; directed by Wolfgang Petersen. 1997.