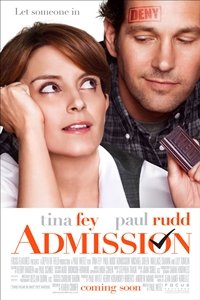 A snooty admissions officer puts her career on the line when trying to get the son she secretly gave up for adoption accepted into Princeton. This is 117 minutes of prefabricated shit for people who are constipated. The performances are uniformly lazy; not for one second do Tina Fey and Paul Rudd attempt to build character. Their idea of acting is Rudd messing up his hair and Fey delivering her patented frazzled fawn, a move that's best suited for 5 minute comedy skits, if that. There's not a likeable character in the movie, yet it's all played for cheap pathos and easy laughs. As Fey's gun-toting, sausage-grinding feminist mom, Lily Tomlin hasn't embarrassed herself this much since playing John Travolta's lover in Moment by Moment. The talentless Paul Weitz (Cirque du Freak: The Vampire's Assistant, Little Fockers) directs. With Michael Sheen and Wallace Shawn. 2013.