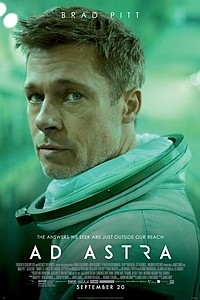 A power surge on an International Space Antenna nearly knocks career astronaut Roy McBride (Brad Pitt, in his earnest, Robert Redford mode) out of commission. SPOILER ALERT: It turns out that Ad Astra, Latin for “to the stars,” is Apocalypse Now in space — there’s a lot of Capt. Willard in Pitt’s colorless narrative voice-overs — with McBride on course for Neptune, rather than up a river. Could the source of the surge have emanated from his long-lost pappy (grumpish and crumpled Tommy Lee Jones)? Enticing production design and special effects enhance a commercial flight to Mars and a deadly, rather Bond-ish chase between Lunar rovers. But for most of its running time, Ad Astra amounts to a rather somber and sterile two-hour orbit. Donald Sutherland drops in long enough to make his presence known and then fall ill, while Liv Tyler’s space-widow acts as a reminder that she was in Armageddon. James Gray directs. 2019.