Across the Universe 2.0 stars 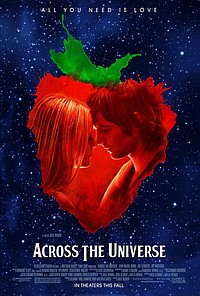 Two-and-a-quarter-hour promo for the Beatles without ever mentioning them by name. A generous, even overgenerous sampler of their songs (thirty-three of them, by the count in the press notes, leaving aside the numberless others that are quoted from or alluded to) has been re-recorded, or "covered" as they say in the business, by a fictitious cast of characters plunked down against the billowing backdrop of the Sixties: the war, the draft, the protests, the drugs, the psychedelics, the Sexual Revolution, all that. To link the Beatles with the upheaval makes a certain sense. Unlike, say, the more enduring Rolling Stones or the going-nowhere Dave Clark Five, the Beatles were a group that really did evolve (or, as some would prefer, devolve) swiftly and dramatically, making them a useful weathercock for the winds of change. You are here reminded afresh of their range and their riches; and in new mouths, you hear the songs with new ears. (The tremulous, down-tempo rendition, for example, of "I Wanna Hold Your Hand" by an Asian-American high-school cheerleader, T.V. Carpio, brings the song a new, a renewed feeling, all by itself almost worth the price of admission.) By the second half, however, the inspiration irreversibly runs out of steam en route to a spluttering climax of "All You Need Is Love." (Wearily, now: yeah, yeah, yeah.) Part of the problem is that, as the counterculture gains momentum in the sequence of events, there's a visible increase in music-video vulgarity, ornamental surrealism, Fellini-esque fantasy, all the elements that go into director Julie Taymor's fabled "vision." Another part of the problem may be that the later songs, even though the playlist in the film does not observe a strict chronology, tend to be more turgid. Part, too, may simply be that two-and-a-quarter hours are too long for a promo. With Evan Rachel Wood, Jim Sturgess, Joe Anderson, Dana Fuchs, Martin Luther McCoy, and cameos by Bono, Eddie Izzard, Joe Cocker, Salma Hayek. 2007.