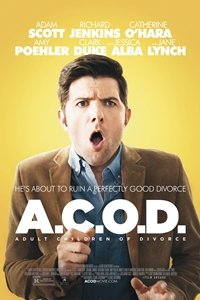 They fuck you up, your mum and dad/ They may not mean to, but they do./ They fill you with the faults they had/ And add some extra, just for you. British appeals-court judge Lord Justice Wall once quoted that bit of Philip Larkin to a couple fighting over custody of a nine-year-old. A.C.O.D., which stands for Adult Children of Divorce, serves as a comedic expansion on the theme. Adam Scott plays Carter; they had to call the cops at his ninth birthday party, so fiercely were his parents fighting. (Scott comes across as a more likeable, less wounded Ben Stiller; he’s fun to watch, but the extra woundedness would have helped here.) Carter is keeping his shit together, but when his man-child younger brother decides to get married, he sets out to get Mom and Dad to attend the wedding without killing each other. Complications (copulations) ensue. 2013.