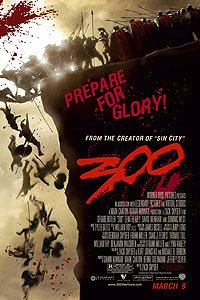 Like Sin City, this takes its material from a "graphic novel" by Frank Miller, and in turn it takes from the film treatment of that one — or to be more precise, director Zack Snyder takes from director Robert Rodriguez — the same, or similar, unnatural light, "virtual" backgrounds, coarse-grained surface, drained color, cadaverous complexions, etc. The same look applied to the same source will obviously not possess the same originality. Sin City, to make a fine distinction, was in black-and-white, sort of, almost, whereas 300 is almost, sort of, in color; but still. (Sky Captain and the World of Tomorrow, without any inspiration from Frank Miller, was an even earlier trailblazer.) The material here is of course quite different, a comic-book retelling of the Battle of Thermopylae, 480 B.C., in which a modest company of Spartan warriors lowered the odds against "the most massive army ever assembled" by funnelling the Persian invaders into the narrow pass known as the Hot Gates. Western democracy, if you please, versus Middle East tyranny, as relevant to our own times as any Bushian gas about "evildoers" and "WMDs." But there is actual, ancient history behind it, too, and accordingly some remedial teaching to be done. "Only the hard and the strong may call themselves Spartans," elucidates the knowing narrator, adding, for the benefit of note-takers or woolgatherers, "Only the hard. Only the strong." (Okay. Got it.) The ensuing gory demonstration of Spartan hardness and strength usefully sums up a juvenile view of manliness — a fantasia of battle scars and washboard stomachs and growling-tiger voices and monstrous adversaries and video-game combat with slow-motion highlights — and the best to be said of it is that no one will mistake it for history; that the history, unlike the three hundred, will come through the ordeal without a scratch. Or to say the same thing another way, the artistic impact of it is altogether soft and weak. Altogether soft. Altogether weak. With Gerard Butler, Lena Headey, David Wenham, Dominic West. 2007.