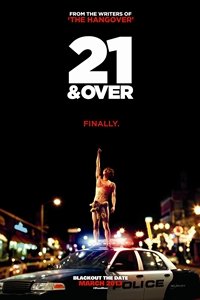 At last. After the "We're too old, but who cares?" middle-aged hijinks of The Hangover and the "We're too young, but who cares?" high-school hijinks of Project X, the Drunken Bromedy genre takes up the entirely age-appropriate collegiate hijinks of 21 and Over. Miles Teller plays the master-bantering mastermind, Skylar Astin is the nice Jewish kid who's maybe settling down a tad early, and Justin Chon is the stressed-out Asian birthday boy they set out to inebriate on the night before he interviews for med school. Chon is a charmer, but sadly, he spends much of the film as unconscious baggage for two dudes crossing that magical border between youth and adulthood. The whole thing is a happy fantasy of debauchery: yeah, the boys get spanked for their transgressions, but each soggy thread is neatly tied by the end, and nobody's even hung over the next morning. 2013.