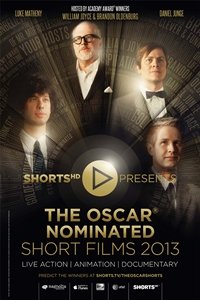 Score one for mass culture: the animating forces behind The Simpsons aren't about to teach you anything new about the possibilities inherent in illustrated storytelling, but "Maggie Simpson in 'The Longest Daycare'" dominates this year's field through old-school craft and wit, and offers a politically topical Ayn Rand hook to boot. (You can't debate laughter.) Of the remaining entries, only the stop-motion "Head Over Heels" feels like an exercise of imagination as well as technique as it tells the story of an old couple of who have found opposite centers of gravity. "Adam and Dog" (yes, that Adam) is beautiful but aimless, while "Fresh Guacamole" and the Bill-Peetish "Paperman" play like warm-up exercises for larger projects. Program hosted by last year's winners, William Joyce and Branden Oldenburg ("The Fantastic Flying Books of Mr. Morris Lessmore"). 2013.