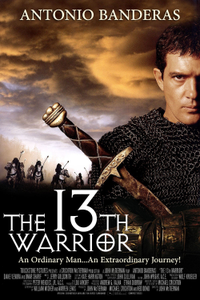 An Arabian Nights tale detoured into a Norse saga. (A little off the beaten path, too, for the author of the original novel, Michael Crichton.) Lots of gore, but lots more hair. John McTiernan's careening Steadicam slips and slides over every possible point of interest. The release was delayed so long as to postdate (by three weeks) the release of McTiernan's subsequent project, The Thomas Crown Affair. A delay of forever would not have been too long. With Antonio Banderas, Omar Sharif, Diane Venora. 1999.