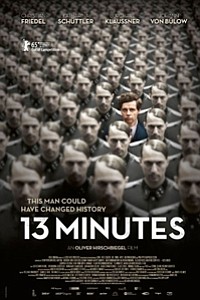 Oliver Hirschbiegel’s Downfall launched a thousand YouTube Hitler memes. Any number of them are more insightful and engaging than this fact-based saga of a German worker who in November of 1939 miscalculated by that much an otherwise foolproof scheme to blow up the Fuhrer. Johann Georg Elser’s (Christian Friedel) botched caper and his subsequent torture at the hands of Reich top cop Arthur Nebe (Burghart Klaussner) should have provided more than enough material for a feature. Nebe kicked things off with a blitz, slathering guilt all over pacifist Elser for the seven bystanders his faulty time bomb didn’t fail to take out. Beware the flashbacks! Once the subplots begins to logjam all that’s left are thirteen good minutes. It puts one in the mind to make a meme: Hitler reacts to Oliver Hirschbiegel’s prosaic flashback transitions. And what’s with all this lovey dovey nonsense in a film about killing Hitler? 2015.