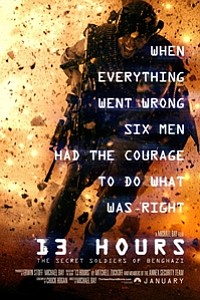 Maestro of movie mayhem Michael Bay (Transformers) turns his camera on the real-life violence of Benghazi 2012 and despairs, giving us the story of a badass American (John Krasinski, sad-eyed and bushy-bearded) who nevertheless finds himself worried, in between firefights and rightly so, that his kids will remember him as “dying in a place he didn’t need to be, fighting a battle he didn’t understand, in a country he didn’t care about.” His brother in paramilitary arms isn’t much comfort, saying only that the “something bigger” he used to fight for is gone now, but “warriors aren’t trained to retire.” It stinks to be a soldier (especially when you get left hanging). The only thing worse, it seems, is being a jerky egghead CIA station chief. Or the bad guys, and “they’re all bad guys, until they’re not.” Bay isn’t great at making spatial sense of the skirmishes leading up to the last stand on the roof; nor is he subtle with his profundities (Joseph Campbell’s “All the gods, all the heavens, all the hells are within you” gets voiced three times). But he’s hell on manly banter amid the explosions (“Just another Tuesday night in Benghazi”), and also moments carefully calculated to make you feel the horrors — and the heroics — of war. Emphasis on "calculated." 2016.