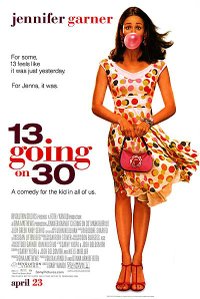 With a sprinkle of Wishing Dust, the disaffected young heroine, on her first day of teenhood, is spirited into her future life as a "thirty and flirty and thriving" editor of her favorite fashion magazine, Poise. Yet she's still thirteen in her head, with none of the knowledge, the experience, and the self-sullying that it took to get there. As in Big (the official point of reference), this proves to be less of a handicap than you might expect. The callowest mind has the best idea for the magazine's makeover ("I want to see my best friend's big sister!"), and the path to Enlightenment, as any adolescent devoutly believes, can be circumvented by shortcut. The movie, blithely directed by Gary (Tadpole) Winick, has a hard time grasping, or keeping a grasp of, its own concept. The spectator's tolerance of it will probably depend on his tolerance of the bony allure of Jennifer Garner -- a death's-head with dimples, and not the most credible spokesperson for the Natural Woman. With Mark Ruffalo, Judy Greer, Kathy Baker, and, the rubber-faced charmer who embodies the heroine at age thirteen, Christa B. Allen. 2004.