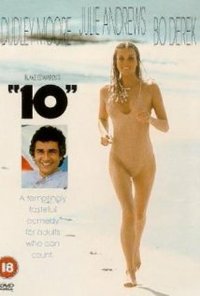 A comedy of male menopause. The hero, a Hollywood songwriter with personalized license plates that read "ASCAP," is explicitly a product of an earlier, more romantic era, and is quite nakedly a stand-in for writer-director Blake Edwards. Edwards's conscientious efforts to adopt liberal, open-minded, up-to-date attitudes lead him onto some pretty soggy ground: the debate over the use of the word "broad" as a synonym for "woman," the commiserative treatment of a homosexual lyricist, the extremely unconventional casting of a black Beverly Hills psychoanalyst, and the damp-eyed characterization of an aging party girl. The filmmaker's magnanimity, however, does not extend to the sexual barbarism of the younger generation — which is what gives the movie its tension. There's some good comedy based on physical discomfort, a good physical performance by Dudley Moore, and a good cerebral one by Julie Andrews. With Bo Derek, Robert Webber, Dee Wallace. 1979.