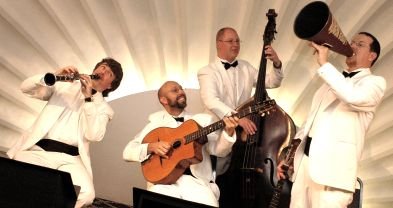 Sound description: A twist to jazz standards of the '20s and '30s.

The Zzymzzy Quartet - which takes its name from a hypothetical “last word” in the dictionary - has been playing swing dances, clubs, coffeehouses, and events in Southern California for years. Inspired by the Gatsby era and the French gypsy jazz scene between the World Wars, the guys from the Zzymzzy (rhymes with "whimsy") Quartet say they have simple ambitions – to "play it like it was when music was unamplified, melodic, swinging, dreamy, and full of sly surprise." The quarter look to capture the glory days of Louis Armstrong and Duke Ellington, humbly and humorously echo the old mantra "it don't mean a thing without that swing."

Peter Miesner is the guy with the megaphone, an acoustic guitar, and the librarian's knowledge of old show tunes. Beston Barnett, the guitarist/singer, went so far as to name his first-born son after the famous gypsy jazz guitarist Django Reinhardt. Paul Hormick plays that bass he's holding like a big fish swimming in the surf. Matt Gill, he'll be the one with the mellow clarinet tone.

Their album Petite Fleur was released in 2017.