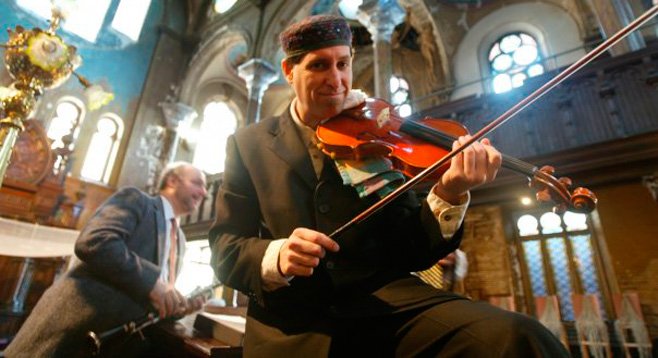 Yale Strom is a klezmer music revivalist who has conducted extensive research in Jewish and Romanian communities in Europe and the Balkans, attempting to recover music lost by generations of war. He calls his band Hot P’Stromi.

In the two decades since his initial ethnographic trip, Strom has become one of the world’s leading ethnographer artists of klezmer. He’s also a composer, violinist, photographer, author, and filmmaker. Since 1981, Strom has been composing his own new Jewish music, which combines klezmer with Hasidic nigunim, Rom, jazz, classical, Balkan, and Sephardic motifs.

Strom’s ethnographic film Carpati: 50 Miles, 50 Years (1996) is about a man who returns after 50 years to his hometown of Vinogradov, in the Carpathian Mountains, bringing with him a Torah from the U.S. for his boyhood synagogue, which has not had one for years. The New York Times described the film as “bittersweet and poignant.”

In addition, Strom is the author of nine books, including A Wandering Feast: A Journey through the Jewish Culture of Eastern Europe (2004). He is the director of five award-winning documentaries, and was the first documentary filmmaker to be given his own run at Lincoln Center’s prestigious Walter Reade Theater for his film The Last Klezmer: Leopold Kozlowski, His Life and Music (1994). Also, Strom's klezmer field research helped form the base for the repertoire of his other San Diego klezmer band, Klazzj.

He has performed in many touring ensembles, though he admits this isn't always the ideal way to present music. "One of the worst gigs was in Berlin at the B-Flat Klub where this huge very drunk German man like six-foot-six came up to the stage in a belligerent manner and started grabbing the mic and literally harassing us. He had to be coaxed gently to leave."

Conversely, "One of the best gigs ever was last June [2015] here in San Diego at the Lyceum Theatre, where my band was joined by the classical virtuoso violinist Rachel Barton Pine for some great improvisational klezmer and Roma music. The audience was wowed by her virtuosity and what the other musicians were doing, all very well known local musicians, and were standing in their seats."

A new CD, City of the Future: Yiddish Songs from the Former Soviet Union, was released on November 13, 2015, with a Hot Pstromi lineup featuring Jeff Pekarek, Duncan Moore, Tripp Sprague, Fred Benedetti, and Lou Fanucchi and utilizing seven different singers recorded at various locales around the world. It is a cultural record of music written in the 1930s by Shmuel Polonski.

There are songs on this album that are being released for the first time that celebrate the joy of life as it was originally sung by youth choirs. PhD Eric Gordon, the album's executive producer, wrote Mark the Music: The Life and Work of Marc Blitzstein, and co-authored Ballad of an American: The Autobiography of Earl Robinson.

"The cover art is unique in that it uses the original cover from the 1931 published music book Yiddish for Youth as part of the CD artwork, and also incorporates my photos from my archives as well as the ones I have taken over the years I have been doing ethnographic research among the Jewish and Roma communities in Eastern Europe."