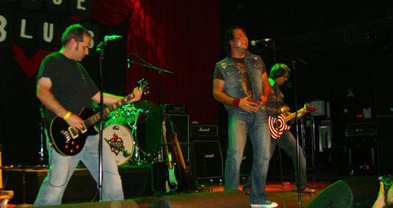 Guitarist Alberto Nebel's band Xolmani -- based in Tijuana -- has been around since 2001. He says the American Idol-ization of Mexico's music scene has hindered his group's progress.

"Rock en Español doesn't get that much interest anymore. Everything has gone pop. It's not like it was in the early '90s. Rock has pretty much gone underground."

"You can get a pirated CD on the streets for a couple dollars before the record is even released. It's so bad that the record companies will develop very few new [rock en Español] bands; they only want to invest in sure things, which means pop."

Though Xolmani won a 2003 battle of the bands for northwestern Mexico, he says it makes sense to try and break into the U.S. market.

"That's why we are translating [and re-recording] all our music into English."