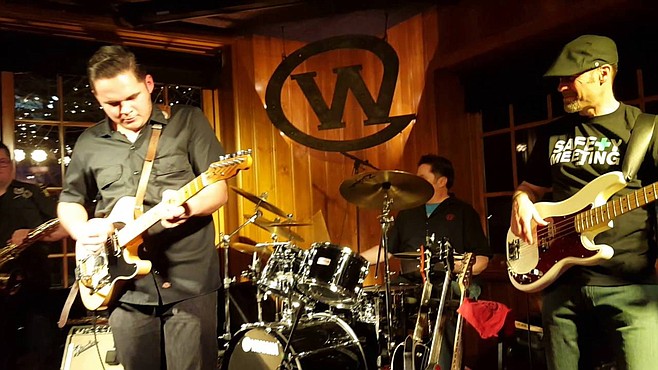 “Back in the day, the blues was the real deal, and it had soul, and there were the greats playing it,” says blues guitarist Wyatt Lowe, who was still in middle school when he began playing in local venues.

Lowe is both comfortable and credible in his role as a frontman, and he knows his way around blues chords and blues scales and appears to be able to solo endlessly in long streams and phrases that contain well-oiled quotes to many of the greats.

“We had a barbecue and blues restaurant in Temecula [Chappy’s Road House] when Wyatt was born,” says Lowe’s mom Cheryl. “Wyatt grew up listening to Billy Watson and Robin Henkel. He was three years old and he’d stand by the side of the stage and watch, mesmerized. We wondered if something was wrong with him. But no. He was just soaking it in.”

Lowe is something of a product of the Blues Lovers United of San Diego (BLUSD) Summer Blues Camp, where he brushed up against blues stalwarts such as Anson Funderburgh and Kim Wilson. “We worked for two months, on the fundamentals,” Lowe says, “of what a blues player should know.”

But young guys playing the blues? Why not indie, or punk? “I don’t think we picked blues out,” says drummer Jaxon Blinn. “It started out that way. I’m really into electronica, but I’m the only one in the band who is.”

“The music we do?” says bassist Patlan. “It’s someone else’s, but we put out own vibe on it.”

Wyatt Lowe’s parents eventually left Temecula for Encinitas. They now run Chappy’s Roadshow BBQ and Catering, which is how they met Scottie Blinn, who became the Youngbloods’ coach. “We catered one of his events at the Summer Blues Camp,” says Patrick Lowe.

By 2016, he had formed Wyatt Lowe and the Mayhem Kings and announced plans to relocate to Los Angeles.