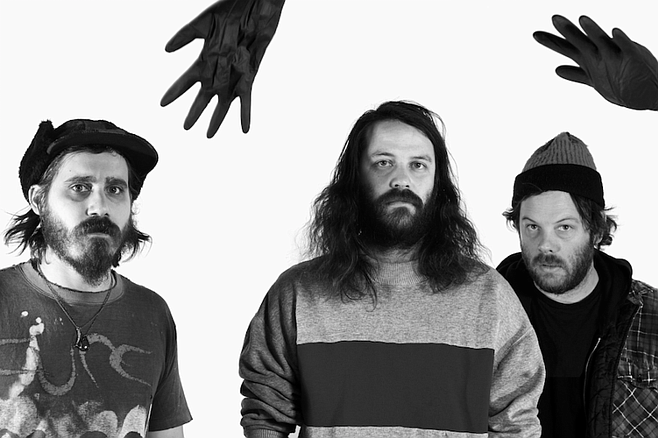 WRITER consists of brothers Jayme and Andy Ralph. Says Andy, “Basically, it’s a two-piece that plays loud thrash music and sings about our lives and introduces a little fiction here and there. We try to tell stories. We fill up a room with sound.”

They rock about relationships (aka shoegaze indie, played by stargazing emos, in their early dayz anyway), and you can guess that these relationships have gone bad.

Still, who among us hasn’t been dumped? Well, when you’re driving for hours and you feel sick about what happened, you need some music to drown out the swishing of the windshield wipers. It might as well make you want to cry and be played well. That’s WRITER.

“We play indie rock, with a little Southern guitar picking,” says Jayme. “At the Drive-In’s album In Casino Out is one of my favorite records in the past ten years.”

The majority of the music is acoustic, but the band doesn’t forgo electric guitar or synthesizers. Members of WRITER may not be masters of their instruments, but they play decent songs, at least/especially when you’re in your pajamas and want to stare out a foggy window.

Longtime local Eli Bowser left the band in early 2009. David Hastings MacAdam III made his debut with the band on March 12, 2009, at Bar Pink. Shortly after that show, equipped with a Honda Element and a trailer, Writer gigged their way to Texas to play during the annual SXSW festival.

Their reach has extended well beyond San Diego, thanks in part to such self-booked touring. “We’ve become real road warriors,” says Jayme, whose well-traveled Honda Element (with attached trailer) was one of several vehicles the band has practically lived in.

Jayme says he’s so road-centered that “I buy boxes of a hundred Cup O' Noodles at a time, and I’ve learned to live for weeks at a time on coffee, grilled cheese sandwiches, and tomato soup. Most nights, I sleep on top of my comforter, so when I wake up, my bed is already made and I’m ready to roll.”

When he is in San Diego, Jayme can usually be found hanging out at one of two places. “The Casbah, to see my favorite touring bands, and the Whistle Stop in South Park, to see our friends play.”

However, he seems to prefer life on the road, as being a touring rock musician is preferable to, well, most any other job he’s held. “I was a preschool- and elementary-school janitor for two years. God bless rock and roll.”

Their early 2011 limited edition vinyl 7-inch Miss Mermaid was supported by a tour, before earning them a 2011 San Diego Music Award for Best Local Recording. They spent that summer 2011 U.S. tour with Cults.

A video was shot for the “Family Dinner” title track, a two-and-a-half-minute grunge sing-a-long complete with chunky riffs and flagrant vocals. Matching the song’s brazen distortion, the video is a fleeting, chopped-up, nightmarish vision of friends eating and practicing good hygiene.

After touring to SXSW in Austin, Texas in March 2012 with Cults and Mrs. Magician, they went on to play an East Coast tour with Margot and the Nuclear So and Sos.

Andy Ralph says he and his brother lived in San Diego for ten years. Why the move to New York? “We felt we needed a different place to live and to play in different clubs and have a new home base. It wasn’t a romantic thing, like, we gotta be in New York. We just needed a change of scenery.” What does he miss most? “Those big-ass burritos.” He laughs. “You cannot get a decent burrito in New York, and that’s ridiculous.”

New videos began streaming online in Autumn 2012 for the songs “Hot Days” and their cover of Santigold’s “Disparate Youth,” from Brotherface, both directed by E. Lee Smith. The first was filmed in Joshua Tree National Park, while the second animates street graffiti from the band’s new Brooklyn NYC neighborhood.

The Brothers reunited with childhood compadre Joshua Greco to record their sophomore album Principle Web, released in April 2016 and described by the band as "a neo­grunge series of interlacing song­stories."

A video for "Neighborly" was directed by Paul Remund, who says "I used an analog tape film process and experimented with live in-camera speed manipulation. We shot at the Old Pfizer pharmaceutical factory in Bed-Stuy Brooklyn, New York."