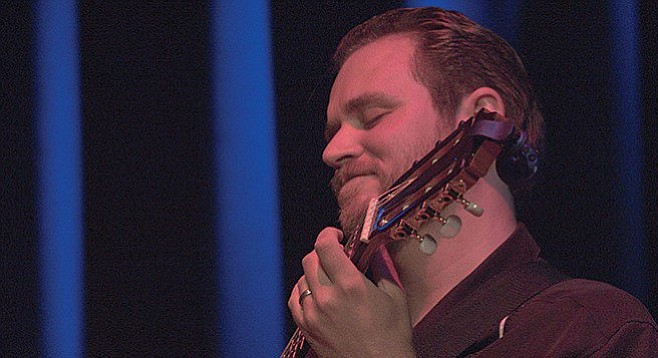 Wilson says people are often surprised about his South American heritage. “Unless they know me personally, most folks aren’t aware that my mother is from Argentina. I don’t look Hispanic, and my name is William Wilson, so it’s not something you’d guess. My first two CDs are all South American music, and another explores the contemporary tango of Argentina.... I think a lot of my love and feel for that music comes from [my mother].”

The San Diego native says that his political concerns aren’t necessarily the same as those that Hispanic Americans worry about, say, immigration issues. “The biggest problem in America is that work is scarce right now. I’ve played for most of the big companies that are being bailed out by the government or have gone under. But government bailouts and takeovers don’t seem to be the solution. I’m self-employed, so I work my butt off or I don’t eat. What is the old communist saying about government workers? ‘We pretend to work, and they pretend to feed us.’ Also, as a Catholic, President Obama’s one-sided stance on abortion and other social issues is not endearing him to me.”

Not that Wilson shuns politicians; he expressed himself to one very visible political leader in the context of a song. “I played for Governor Schwarzenegger a little while ago, a duo gig with bassist Jeff Basile. I did a tango album, so I decided to play ‘Por Una Cabeza,’ the dramatic tango featured in Arnold’s movie True Lies. I don’t think he noticed or cared that I played it, and I doubt he realized the connection between my feelings and the movie’s title. But it had to be done.”

Also a guitar instructor, Wilson’s website GuitarGames.net features video games that he created, designed to teach guitar and music fundamentals. “You can learn to read music while fighting space monsters! I force my students to play the games, and I play them all the time myself, to keep coming up with improvements. Right now, I’m working on putting them on the iPhone.”

His CD, Tango for One, explores the contemporary tango of Argentina. Wilson has also been a member of the flamenco and jazz group the Peter Pupping Quartet for over a dozen years and performs on their two albums, Samba Nights and Embarcadero. With his wife, soprano Mary Ann Carr, he also plays with Duo Ceciliana, which specializes in chamber performances.

In addition, William is active in composition, creating works for symphony, opera, voice, piano, and guitar. As of 2010, he serves as assistant conductor of the Encinitas Guitar Orchestra, a 25-player ensemble. Wilson is also involved in music education, teaching private guitar lessons at Guitar Sounds Studios in Encinitas.