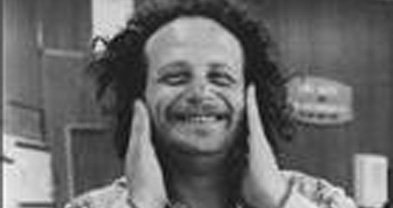 Current Status: Living in an assisted-living home in L.A. and retired from the music business. Probably.

Long before David Peel, Weird Al, Mojo Nixon, and the Rugburns, Larry "Wild Man" Fischer was carving out his own distinctive niche in the history of rock 'n' roll novelty and cult music. A street singer living on the obscure fringes of the L.A. subculture, in early 1968, Wild Man would sing anyone an original song for a dime. He offered these improvised and somewhat off-key ditties to anybody who'd listen, serenading unsuspecting passersby with his most singular brand of certifiable looniness.

Wild Man had been in and out of a few mental institutions, but he cut a charismatic figure, barely keeping his voice below a shout as he sang about his life, his dreams, his girlfriends, his family disowning him, and any other subject that came into his head at any given moment. Disturbing and introspective songs, with lyrics that made it frighteningly easy to understand the sadness and desperation of Wild Man's merry-go-round world.

Already a cult figure among the city's rock 'n' roll intelligentsia, Wild Man came to the attention of another musical madman with an eye toward the satiric and outrageous: Frank Zappa.

Zappa had just recently begun his own record label, Bizarre, and something about Wild Man's rants intrigued him. In a move which seems strange even for Zappa, he put Wild Man in a recording studio. And let the tape roll. And roll. Thus was born the cult album An Evening with Wild Man Fischer.

Released in late 1968, Evening With was somewhat of a sensation, with songs like the a cappella "Merry Go Round" destined to become Doctor- Demento staples. "Circle," with the Mothers of Invention, was even put out as a single, and Wild Man began playing fairs and clubs all over the country. Rolling Stone even lent credibility to Wild Man's growing rep with a positive review of Evening With, saying that the double album "captures the total being of one strange member of the human community."

Wild Man would sing about his relationship with Zappa in later songs. He still complains that he never made money from the album and he can't recover the rights to his own masters, which are currently controlled by the late Zappa's wife, Gail. Yet he surprised most everyone by bouncing back in a big way. Then-fledgling Rhino Records was just working toward their first album release, and it was decided that an LP of new Wild Man music would be their premier project. Wild Man had already penned their theme song, "Go to Rhino Records," and next came the full-length stream-of-consciousness experiment known as the Wildmania LP.

A comprehensive overview of Wild Man's recorded output is unlikely, since Gail Zappa has publicly proclaimed her unwillingness to release the Evening With masters, citing it as a poor example of Frank's work. Wild Man kept landing in off the wall projects, however. One new friend and compatriot named Mark Mothersbough, then of those robotic spudmeisters known as Devo, recruited him for an afternoon to record a song (still unreleased) called "Fun with Your Body."

Except for the occasional concert, Wild Man withdrew almost completely from the music industry around 1985, and he's still disputing royalties owed by Rhino and Paramount (his lawsuit against Paramount was covered in Variety and elsewhere). He moved to San Diego to get away from the city where almost everyone seemed to know who he was.

Moving around between low-key and low-budget downtown hotels, he quietly became a San Diego street fixture, though he introduced himself only as "Larry" so people wouldn't connect him with his still- somewhat-famous Wild Man persona. In August 1988, Bill Mumy came to town for the big San Diego Comic Book Convention, along with a few musician friends, all of whom were also moonlighting as comic book creators. Their new band was called Seduction of the Innocent, after a famous 1950's book which had tried to blame comics as the source of all juvenile delinquency.

Wild Man was coerced onto the stage long enough for an incandescent set that included his doo-wop ditty "The Taster" and an a cappella rendering of "Merry Go Round" ("I'm getting a little sick of that song" he now says about his best-known tune). The crowd was rowdy and responsive, even those who weren't familiar with Wild Man. His ever-increasing volume, enthusiasm, and spasmodic on-stage body language proved infectious, and the audience handed Wild Man the most earnest and sustained applause of the evening. It was a rare performance, one of only two dozen or so "pro" gigs Wild Man can recall playing (he'd backed out on many more, becoming so undependable that few bookings were offered to him after so many no-shows).

Few are aware that, while in San Diego, Wild Man appeared in a Rugburns promotional video -- the clip was only televised once, on local public access TV, and remains virtually unseen.

Wild Man was offered the chance to appear in the video by Bob Duffy, a friend of the band whom Wild Man met at the local record store Garage Rock. The video project was being cooked up for the band's major label debut on Priority Records, Taking the World by Donkey.

The long-form promo was shot in various locations around San Diego, interspersed with live clips and interview soundbites with the group, but it is Wild Man's running narrative that propels the oddball project. After airing the one time, nobody at MTV or VH1 was clamoring to show the video, and it was shelved.

Today, Wild Man can't decide whether he wants to ever record again. There is, in fact, some question as to who would even offer to do the recording. His fan base was never large enough to give him hit records, though his notoriety and fame were and are widespread, especially among Zappa's legion of admirers. His psychological problems, like those suffered by Arthur Lee of Love and other Wild Man contemporaries who've never quite adjusted to the world around them, make it difficult for him to deal with the idea of getting back into the music industry.

I asked him if he was happier then or now. "That's a hard question to answer," he offers after a rare and thoughtful pause (Wild Man's nonstop verbal barrage is, by his own admission, overwhelming to many). "I was younger. But now I don't have all the pressure, I'm not always trying to track down royalties and get work. My fame kind of subsided after the seventies. Now I don't get depressed as much."

If he were to record another album, Wild Man does have new material. "I wrote this song the other day, about this guy James, he used to be in the Penetrators. I met him at a bookstore." He then sings me the verse of another new composition, "Nobody's Happy":

"I'm walking down the street and nobody's happy

He sings with alternating glee ("yes they are") and glum ("no they're not"). Up and down, back and forth, from depression to manic joy and back again.

Another autobiographical insight from a man who wears his heart, his emotions, and his entire self on his sleeve like perhaps no other performer in rock history.

Wild Man Fischer is happy. No he's not. Yes he is.

Fischer passed away on June 16, 2011, at an L.A. hospital, from heart-related complications.

The video footage just posted to this page includes rare 1995 outtakes from a never-released promo video called Wildman Fischer Meets the Rugburns, shot around town at Garage Rock Records, the Gaslamp streets, and the downtown Burger King (and featuring live Rugburns footage at the Casbah). Fischer was offered the chance to appear in the Rugburns promotional video by Bob Duffy, a friend of the band that Wildman met at the local record store Garage Rock. The video project was being cooked up for the band's major label debut on Priority Records, Taking The World By Donkey.