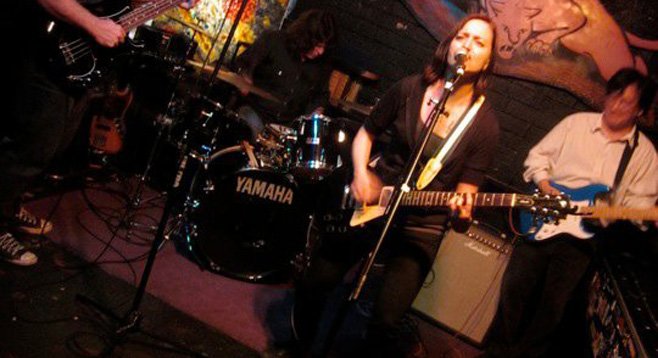 “Most of my songs are short, sweet, and full of jangly pop hooks,” says Bailey. “Basically, it’s melodic pop rock. It becomes more melodic as I get more focused on my guitar playing, which used to be more or less secondary to the lyrics.”

Originally from Colorado, Bailey was the youngest of three siblings, one of whom inspired her first musical aspirations. “My older sister played piano and violin, so those were the first instruments I learned on, when I was around eight. But I also wanted to sing, so I later picked up the guitar and started learning [to play] when I was in junior high. That seemed like the most efficient way to evolve into a solo singer/songwriter. I got a Fender Telecaster and then a Gibson Les Paul Studio, [and] I got a locally made Taylor that kept sounding better over time, the more I played it.”

Bailey attended Seattle Pacific University in Washington, where she began gigging at area venues, and she spent a short time plying her sonic trade in Nashville before landing in San Diego in 2002.

She says San Diego isn’t the easiest place to be a so-called chick rocker. “Sometimes it’s a challenge convincing folks, particularly clubs, that I’m a rock and pop artist and not a singer-slash-songwriter. I do scale down my show on occasion for acoustic sets — I’d rather have an acoustic gig than no gig — but I’m primarily a rock-band kind of musician. I’m always looking for a chance to connect with a wide-ranging crowd.”

That connection sometimes happens one on one, thanks to her online, on-demand Wendy’s Virtual Show. “It’s a video-chat concert, where someone can request a time and a day for me to give them a live concert performance on the computer. All they need is video-chat capability.”

“I usually do my own songs, but I might tackle the occasional cover.”

Bailey’s self-released EP It Ain’t Rocket Surgery was rereleased in early 2009 by local Blindspot Records, who also issued her 2011 CD String Theory. Produced by Mike Kamoo (the Stereotypes, the Loons etc.), String Theory is indie rock by default, but actually covers a lot of stylistic ground, with songs penned by both Bailey and Bart Mendoza as well as lead vocals from both. Guest appearances include Lee Harding (backing vocals) of Echo Revolution and Ed Kornhauser of Purity of Essence (keys).

“I’m at a unique crossroads music-wise,” Bailey told the Reader in Autumn 2012. “I turned down a representation and a recording contract from a Nashville agency after months of discussion, I’m playing sans band for now...interesting times. But excited for however and wherever it lands.”