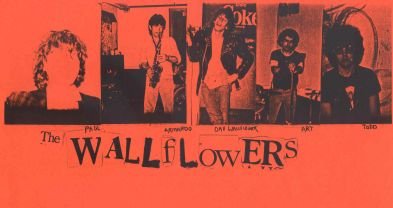 Among their first paying public gigs was opening a May 1983 ska concert at Dance City near 70th Street, where a Salvation Army thrift store later setup shop. One of their early standards “Funland” was named for a long ago demolished downtown pinball arcade they frequented, but also commented on the vicarious cultural situation of the post-punk generation. Commercially the early Wallflowers generally lived up to their moniker, on the fringes of the SD punk rock and mod scenes, but never really accepted by either. After releasing four songs on two compilation tapes (BCT’s Eat Me and Brain of Stone ), the original band disbanded early in 1984, with Tommy and Mark going on to join the Morlocks. David played shortly in a studio group called the Ramblers with guitarist and Music Power producer Eric Camillo.

Later, in 1984, the band re-formed with David and Paul joined by guitarist Todd Lahman, alto sax player Armando, and drummer Arturo Reyes (later replaced by Matt Johnson). In the interim, a new underground scene had morphed around the Che Café on the UC San Diego campus. The “Che Underground” comprised of other iconoclastic bands such as Noise 292, the Rock’n Dogs, the Answers and Hair Theater. In this scene, the Wallflowers finally found a home livening up events with their constantly changing line-up of marimbas, trumpets and timbales, all overlaying the Wallflowers signature bump and grind.

In 1985, the band signed with Mystic Records and recorded an EP entitled The Legend of the Wallflowers. True to their roots however, the band always felt most at home on their own turf in the gritty SD downtown they sang about, before it became gentrified into the Gas Lamp Quarter. Their anthemic “Paradise on 4th Avenue” pays tribute to Steve Epeneter’s Studio 517, located on that street, and the rough and tumble life and times of a SD that has long since disappeared.

Following the Wallflowers final performance at Davefest III (the Che Underground’s answer to Woodstock), the band members went their separate ways. David disappeared overseas not to re-surface again for almost two and a half decades. In the interim, he studied economics and became a U.S. diplomat with the Agency for International Development (USAID), posted in Kenya. He switched to guitar a few years ago, and went on to play in the Blues Gangsters, a fixture on Nairobi’s raucous bar scene.

Paul remained in San Diego, where he and Matt recorded a single with the Morlocks. He went on to play with the ska band Unsteady, as well as becoming a dubstep deejay on www.react.fm, known to his audiences as the P Man. Matt attended law school in New Orleans and went on to practice immigration law on the Mexican border in El Centro. Other members of the Wallflowers are tough to locate. Armando sadly passed away a few years ago.

Wondering if the Eric Camillo mentioned is the musician I used to know of Eric Jaymes & the Babylon Flames....music was amazing & timeless. It was back in the late 80's, still have an old tape I listen to:-).

I am so excited for the new album! Just heard the first single and I am loving it. If you haven't heard it yet, you should check it out...http://www.rollingstone.com/music/news/song-premiere-the-wallflowers-reboot-the-mission-20120723