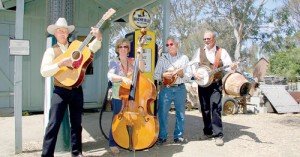 The Virtual Strangers were formed in 1992 in Napa, California. Originally, the members were Mike Tatar Sr. on banjo, Mike Tatar Jr. on fiddle, Jon Cherry on mandolin, Jerry Harwood on guitar, and Yvonne Tatar on bass. Given their location, the band played many gigs for wineries, private parties, street fairs and mini festivals. Due to corporate downsizing the Cherrys in 1994, and the Tatars in 1996, they relocated to San Diego.

Mike Tatar Sr. (In Cahoots, Snowy River ) has been playing banjo since 1977, when he discovered bluegrass music. He also plays guitar and sings lead and harmony vocals, as well as playing the resophonic guitar.. Mike also hosted the Bluegrass Central show on the internet at world music webcast, was the President of the San Diego Bluegrass Society (SDBS) for four years, and was the Membership Chairman for over seven years. He also co-chaired the Summergrass Bluegrass Festival in Vista.

Jon Cherry (Union Creek and Snowy River ) started playing bluegrass in the late 1960s. Dissatisfied with many of the mandolins he has played, he constructed his own “Cherry” Mandolin. He also plays guitar and sings harmony and lead vocals.

Yvonne Tatar plays the stand up bass and sings harmony vocals. She played bass in high school until graduation. After having children, she returned to the bass playing with In Cahoots and the California Old Time Fiddlers Association, accompanying many fiddlers in both performance and contests. Her father, grandfather, and great grandfather played old time fiddle.

Guitarist/singer Kit Birkett has been playing bluegrass since the mid 1960s. His rhythm playing adds a rock steady beat to the band and gives it the drive a bluegrass band needs. His band credits include the Squirrel Barkers and the San Diego band Down the Road, winners of the 2001 Southwest Bluegrass Play-offs.

The band has an alter ego named the Tatar Patch Bluegrass Buddies, performing educational sets at schools, children’s music camps, and other youth programs. They relocated to Nashville in 2017.