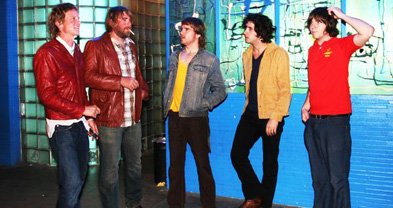 Sound description: Straight-ahead indie rock, with a lush sound that evokes a bit of Queen and the Dresden Dolls.

"We recorded the whole thing straight to tape," says Vinyl Radio front man Matthew Binder. "This is how the Beatles and the Stones did it."

Over the last few years, however, two-inch studio recording tape was not being manufactured.

"There was a bit of a scare," says Mike Kamoo, who produced and recorded Vinyl Radio's 2007 CD at his Earthling Studios in Santee. "Tape was out of production for about six months. I had about 25 reels stockpiled." Though Earthling is equipped to record digitally, Kamoo says, "In the last three years I seem to get a lot of bands who want to record analog. It's a dirtier, rougher, rawer sound."

"Digital sounds glossy and overproduced and really shiny," says Vinyl Radio guitarist Keith Hilton. "The Smashing Pumpkins' Siamese Dream had, like, over 100 guitar tracks. It's a colossal disappointment when you see them live and you don't see a hundred guitars.

"When digital came out, it made things a lot more efficient; it made it super easy to overdub and fix every little thing. Every time you rerecord over a tape, the quality diminishes a little; it gives you more of a sense of urgency. With digital you can go back a thousand times. [Rocket from the Crypt singer/producer] John Reis has a three-take rule; he says it should never take more than three takes to do a song. I subscribe to that."

According to Kamoo, local studios such as Pineapple, Big Fish, and Signature Sound offer analog recording facilities. Other local bands who have recently recorded on tape include the Heartaches, Society, the Spots, Lady Dottie and the Diamonds, Silver Sunshine, Alta Voz, the Glossines, Rookie Card, and Kamoo's band, the Stereotypes.

Vinyl Radio broke up in July 2007. Keyboardist Andrew Bernhardt posted a message online about the breakup, and his Swedish Models band project:

"The ongoing battle that you have when you play in several bands is the amount of which is sacrificed...You dump a lot of your soul, sweat and time when it comes to making music and too many people spread themselves thin and each group in turn suffers. Playing music can become like being a swinger, you want to hook up with as many girls as you can because they're all intriguing in different ways. It's the same thing...You may dig one dude's guitar playing, or another's drumming, and want to take on all the projects. There's some definite incest going on in the music scene here and in other cities too.

"But the key is focusing on the one sound, the one perfect girl for you at the present time, the stuff that you write at 2AM, the music that depicts you and your writing...the reason why you started and continue to play music in today's noise wasteland.

"So this situation was brought on by a need for focus. The Swedish Models was a group that we were trying to put together...we're really excited about the Swedish Models, and looking forward to sharing the recordings and performances with anyone that we can as it progresses."