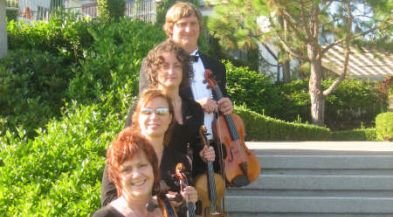 The violinists and cello players of Vintage Strings have years of performing experience.

A cellist for over 30 years, Priscilla Norris has studied with Douglas Graves, Robert Ashby, Paul Anderson, Peter Farrell, and Tom Stauffer. After completing her B.A. in music, she went on to get her
teaching credential. Active in the San Diego freelance community for over 15 years, Norris continues to play for various community theater groups as well as local orchestras.

Maya Ginsberg has been studying the violin since age 11. She studied in the public schools of New York and Oregon and was active in many junior orchestras, including the Oregon All-State Orchestra. Maya continued her education at the University of Oregon, studying music performance. Ginsberg has been an active member of the North Coast Symphony Orchestra for the last 12 years and the president of the board of directors of the North Coast Symphony since 1997. In addition to her work as the violin clinician at Mount Carmel High School, she's the creator and presenter of a music education program for elementary-age students and teaches violin privately in the San Diego North County area.

Laura Wanek completed her B.A. in music from San Diego State University. While there, she studied with
internationally known violinist Michael Gaisler. Currently, she is studying with Hernan Constantino, concertmaster of the San Diego Symphony. Besides playing with Vintage Strings, Wanek plays for local musical theater groups and orchestras. She has performed with members of the San Diego Symphony and other free-lance groups in San Diego and Santa Barbara counties.

Michael Tagart began playing viola and cello at the age of 12 and violin at the age of 14. He attended San Diego State University on a full scholarship and held a position in the university's resident
string quartet. Tagart is also a studio musician who has recorded with Jane Lui, Al Howard, Aaron Bowen, and many more. He's is also the founder and artistic director of the Notre Temps String Ensemble.