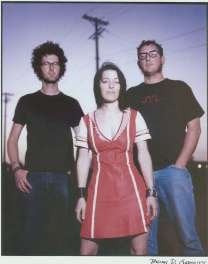 Influences: Mike Watt, the Groovey Ghoulies, Black Flag, X, the Original Sinners, the Dickies, the Melvins, the Dead Kennedys, Bad Brains, the Descendents, Jawbreaker, the Ergs, Toys that Kill, Archers of Loaf, the Clash, the Buzzcocks

Vena Cava is a three piece pop-punk band formed in North Park in 2000. The band is fronted by a brother/sister singing team, April and Corey Froschheuser, along with drummer/vocalist Patrick Murray.