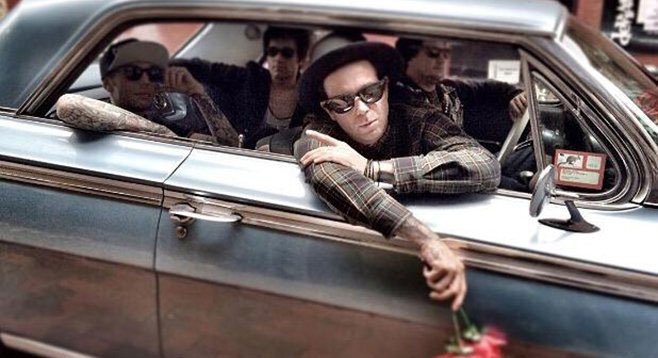 Sound description: Garage-rock with a mission.

Unwritten Law formed in Poway in 1990, with its original lineup including Scott Russo, Wade Youman, and Steve Morris. After releasing several albums and touring half the world, drummer Youman was fired from the band in 2004.

Interviewed by the Reader around the same time, Youman showed off a huge "FOR THE KIDS" tattoo that spans his chest. He got inked on the day he was booted out of the band he says he launched. Youman said the slogan best explains the difference between him and Unwritten Law's lead singer, Scott Russo.

"Scott [Russo] is now just using the band to boost his Hollywood macho career...it has nothing to do with what Unwritten Law has ever been about. He's real fake. He always has been. He's real self-absorbed...Unwritten law is now a business. That's all there is to it, and it sucks."

As far as the other members go, "I'm being told by one of them that they are hanging out purely because of the money coming in."

Youman said he saw his ex-bandmates when Unwritten Law played at the House of Blues in Anaheim. "Half of them wouldn't even look me in the eye."

Even his old record label has come after him. "My website wadeyouman.org was shut down by Atlantic Records because I was posting songs that I helped write. I posted the songs for free. They got ahold of my Internet server three months ago, saying Atlantic Records owned these songs. So I said on my new website [unicursal.net] I'm still gonna give these songs out.... What's little known is that I was very much one of the songwriters. On the first two records, I wrote most of the lyrics."

Attempts to get a comment from Unwritten Law manager Les Borsai were unsuccessful, but Russo said that it was true that Atlantic/Lava took action against Youman's website. "I heard they shut it down twice." He said the band has done nothing to hold back Youman's royalties. "We couldn't stop him from getting paid even if we wanted.... Everyone gets paid [royalties] twice a year. We can't stop ASCAP from paying him."

Unwritten Law's 2005 album Here's to the Mourning debuted at #51 on Billboard's Top 200 chart, the band's highest debut to date. A single from that album -- "Save Me," co-written with Linda Perry of 4 Non Blondes -- hit the top ten on many alternative charts. Around the same time, Fuse TV ran a 30-minute special on the band, including a live performance and interviews.

Guitarist Rob Brewer was fired from the band in April 2005. "Long story short? [Rob Brewer] sucks. He hit me and then we fired him." So said Unwritten Law's Scott Russo to MTV News April 11 2005, announcing that guitarist Brewer had been booted after an onstage fight on March 23 at the House of Blues in Anaheim that left Russo minus a tooth and Brewer missing part of his pinky.

Russo says the onstage argument was over Brewer's refusal to play "F.I.G.H.T." from Here's to the Mourning. "So I said on the microphone that Rob's mad at us. I went over to try and give him a hug, and he pushed me." Russo says he threw some water at Brewer, whereupon "he knocked one of my teeth out. So I walked offstage. Rob did too. But I walked back out, threw his guitar on, and we finished the set without him. Then I threw his guitar into the crowd and gave it to the kids."

Russo says he found Brewer backstage holding a vodka bottle. "He tries to hit me over the head with it.... The bottle connects with the top of the door jamb and smashes, cutting half of his right pinkie off. Needless to say, he couldn't play the next two or three shows because he had to have surgery to reattach his torn ligaments."

According to Russo, Brewer also shoved a fan who made his way backstage to meet the band in Anaheim. "He yelled at the kid, 'What the fuck are you doing in my [dressing] room?' and he hit the fan across the room. We were just, like, 'What the fuck is wrong with him?'"

The band continued touring as a quartet.

Unwritten Law spent much of 2006 recording a "best of" album entitled The Hit List, which featured 17 songs, most re-recorded by the current lineup, as well as 2 new songs. Released on January 2, 2007 by Abydos Records, it's lead single "Shoulda Known Better" charted high on several alternative charts. Interscope Records released their own "best of" Unwritten Law compilation entitled, 20th Century Masters: The Millennium Collection.

In 2008, in addition to touring Australia with Sprung Monkey, the band has a live DVD and CD called Live And Lawless. The 2-disc CD/DVD, capturing a live performance at Hollywood's Key Club, was produced by Devin DeHaven (Busta Ryhmes, Method Man, Papa Roach), and includes 13 live tracks as well as behind-the-scenes footage and band interviews.

In late 2010, the band invited fans to submit cover art for their sixth studio album, with plans to release three of those covers on three different album versions. Swan was released March 29, 2011, via Breaksilence Recordings/Suburban Noize Records.

Going into 2011, the band included Scott Russo, Steve Morris, Pat Kim, and newest drummer Dylan Howard. After being banned for ten years for allegedly starting a “riot” in Sydney, Australia, they were allowed back on this summer’s Vans Warped Tour.

In 2011, bassist Pat Kim (with the band for 13 years) and guitarist Steve Morris (a 20 year vet) quit the band, after what was described as a physical altercation with frontman Scott Russo. Taking their places: guitarist Kevin Besignano (ex-Bullets and Octane) and bassist Derik Envy (ex-Red Light Sky).

By 2014, founding drummer Wade Youman had mended fences with Russo and returned to the band (having spent a couple of years with Demasiado), and the duo began recording an acoustic album with Russo’s brother Johnny Grill on bass and guitarist Chris Lewis (Fenix TX, Spell Toronto).

“We don’t beat the shit out of each other anymore,” Youman told the Reader. “Me and Scott’s breakup was like a divorce. It took patience and trust-building to get it back together. We started talking to each other two years ago. We are now on the same page.”

As of 2018, former guitarist Steve Morris was playing with Gods of Mount Olympus, alongside Paul Rucker (Street Dogs) and Matt Riddle (No Use For A Name). Demasiado reunited, without Youman, though Youman occasionally appeared with them in concert.

In early 2019, the 20th anniversary of their self-titled album was celebrated with its release on vinyl for the first time via Srcvinyl, with copies available on white vinyl and a limited run of 500 on fire orange wax.